Alpine Ice vs Water Ice
It's kinda like the difference between alpine rock climbing and cragging.  Remember that we're preparing you for is alpine ice, not necessarily water ice.  A lot of the skills are transferrable, and you could definitely go climb some waterfalls (I encourage you to find ones you can top-rope) with your alpine ice equipment if you wanted to, but don't feel like you have to!  Climbing waterfalls is not expected of you at any point within the Intermediate course.

Ice Climbing vs Rock Climbing
You should definitely be comfortable with the all the skills required for multipitch rock climbing before you start ice climbing.  Passing Rock 2 is required in the Mountaineers, but I'd strongly recommend having climbed a few multipitch rock routes more than just Rock 2, so that the rope management and belay transitions are approaching second nature.  After that though, ice climbing is still not rock climbing, and this is why.


Okay okay, all of that scary safety lecturing aside, lets get into how climbing alpine ice is actually done!

Moving on the Ice
Moving on ice is really easy.  Moving on ice while expending the minimum amount of energy, so you don't fatigue, is where the challenge lies.  Here's a long video (completely optional if you want to watch it) with good advice on how to move on ice:  https://www.youtube.com/watch?v=RHqmCsGZpnY


Multipitch Belay-Anchors on Ice
So far on rock climbs, we've taught you to almost-always build anchors with three gear placements, and a cordelette rigging them together.  If you remember back to ropes and anchors, that's not the only SERENE anchor option.  On ice, swinging leads is assumed, efficiency of building/tearing-down the anchor is highly valued, and the trust in a single ice screw placement is greater than a single nut placement (good ice can be extremely strong, there's less chance of human error at screwing in a screw than positioning something in odd-shaped rock crack, and a screw isn't going to get "jostled out" like a nut might.)  So, we build a different SERENE anchor.  Two ice screws, clove-hitching the rope into both of them with locking carabiners, and you're done.  The screws are Solid, it's very Efficient, it is Redundant even if there's just two not three.  As for Equalization, we intentionally opt not to equalize ice anchors.  It's best if one screw is under load, and the other is not.  A loaded screw puts pressure on the ice, which generates a tiny amount of heat, which weakens the screw.  By keeping load off of one screw, at least one is not being weakened while the belayer hangs off the anchor.  To achieve No Extension, it's best if one screw is placed high, and one is low.  With the rope clove-hitched directly to both screws in the correct order, a failure of the lower screw means the load is immediately held by the upper screw, with no extension.  See the attached pictures from Freedom of the Hills.  Also, watch this video:  https://vimeo.com/80485814  (They use twin ropes in that video, which is okay, but we'll usually still just use a single-rope.)  The Mountaineers-official way to belay a follower on a pitch of ice is not using your device's autoblocking "guide mode" off the anchor like we usually do for rock.  Instead, belay the follower off of your harness's belay loop, but redirect the belay via a single alpine-draw clipped to the higher ice screw of the belay anchor.  (See the other attached picture from Freedom of the Hills.)


Gear for Alpine Ice
Read what I wrote about an ice tool & crampons in my advice about gear for Intermediate here:  (scroll to the very bottom)  https://www.dropbox.com/s/4al5e9xmt5hlx62/Rob%27s_Mountaineers_Intermediate_Gear.rtf?dl=0
Remember that since we're talking about alpine ice, the alpine environment is going to throw a variety of conditions at you, so the ice axe & crampons you have with you need to work on snowfields as well, not just straight-up ice.  That means an ice axe where you can still plunge the shaft vertically to self-belay on snow, and crampons with horizontal front-points so they have a chance of holding in snow, rather than slicing through snow as vertical front points would.


Ice Screws
For ice screws:  on glacial ice, longer is better, so I'd recommend mostly screws in the 19cm to 22cm range.  Glacial ice doesn't always form the super hard ice-cube-out-of-the-freezer style ice (which is clear, glassy, or sometimes blue,) sometimes it's a little more granular (opaque, white, or dirty looking,) like a really really hard old snowfield, so the ice screw acts like a small picket in that stuff.  There's some advice out there encouraging people the angle the head of ice screws towards the direction of pull slightly.  While that does yield higher slightly strength placements on high-quality waterfall ice (the clear glassy stuff,) you should NOT angle the head of ice screws towards the direction of pull in glacial ice (because the ice screw is somewhat acting like a picket in that weaker ice, and you obviously would not angle a picket towards the direction of pull.)  Keep it simple, and place the ice screw straight into the slow, exactly 90° from the direction it'll be loaded, not angled towards or away from the load.


Rappel Anchors on Ice
That same video I linked to earlier shows how to build V-threads really well.  Here's that link again:  https://vimeo.com/80485814   For Ice 1 and Ice 2, you'll need to bring a V-thread tool.  I've used both a cut-up wire coat hanger, and the commercial "Petzl Multihook."  Honestly, the coat hanger worked better, it was longer, and since the end wasn't a perfectly clean cut, some metal spurs act like barbs, and it really grabbed the accessory cord.  The Petzl Multihook was okay, but it wasn't quite long enough for a V-thread drilled with a 22cm screw, which defeats the whole purpose in my mind.  There are other commercial V-thread tools out there, so maybe a different model would work better.  Also make sure you bring one or two pieces of 7mm cord for practicing V-threads.  4-feet in length minimum.  5-foot chunks of cord might even be better, leaving you more room to tie the knot, and reducing the V-angle of the cord coming out of the V-thread.


What I learned from Ice 1
I wanted to share the biggest thing I learned from the Mountaineers Ice FTs: dress to get wet.  (It seems obvious to me now, but I didn't think about it before my first time.)  Lots of little ice pieces with break off and fly everywhere when you swing the ice tool, and then melt if they get lodged in your clothing.  I'll be wearing rain pants and my rain shell jacket, with all the pockets zipped up before I start climbing.  Bring 3 or so pairs of gloves, so you can change into a dry pair after they get wet.  A tip I learned from Meredith: buy some of those big yellow dishwashing gloves from any grocery store in size XL, then slip them over your liner gloves so you've got some insulation underneath them.  Those yellow dishwashing gloves have great grip, and they're more waterproof than anything sold at any mountaineering store, they're just not insulated.  You'll want eye protection of some sort.  Sunglasses are fine, ski goggles could be awesome because ice bits won't find their way inside them around the edges.  Being out on the lower Coleman glacier in the summer is actually quite hot.  Bring lots of sunscreen, and drink lots of water.  You could bring a steripen or pump filter, since there's a lot of little water channels running on top of the glacial ice during the summer, and that ice cold water tastes so good. 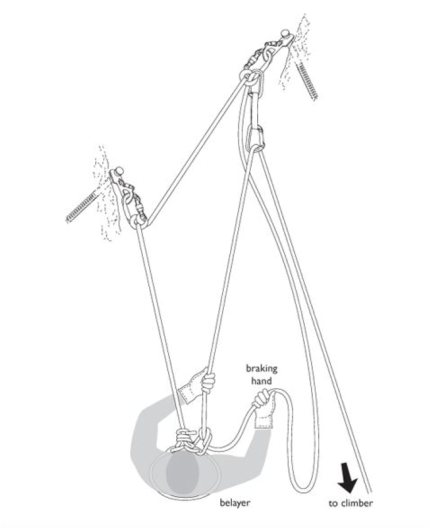